Why Does Water Inspire Artists So Much? At the moment, I am building a pond, I have to say it’s been hard work with a lot of planning, designing and with a little help here and there from good friends, has overall been very satisfying. Water and garden features really do inject that extra interest and texture into the garden, not only visually but for the nature they attract, the relaxing sound of running water, no doubt it’s really rather calming and it has become a great project over the summer days and evenings for me.

Whilst creating this new area in my garden it made me think of so many other artists who have been inspired by water, surrounded by water or indeed just enjoyed painting the effects of water. From Medieval art to the Impressionists with Monet and now Hockney, water has been a part of art since the creation of water itself. Obvious I suppose with our human dependency on water, not only to drink but also to bathe, to clean clothes, to water plants and to cool off on a hot day. But also water is a power which humanity can’t quite control, flooding – like the recent floods in Germany which took lives and devastating Tsunamis that wiped away entire civilisations have been horrible events in which people cannot predict or ever hope to completely understand. We are also surrounded by oceans we’ve only explored 5% of, water is like an alien world to us but also something we interact with and get inspired by every day.

Monet’s depictions of water are some of my favourites. His now famous and massively reproduced ‘Water Lilies’ series have obviously captured people’s visual pleasure – dotted with waterlilies and grounded with the structure of his Chinese inspired bridge, the subject matter, gentle use of colour and shade create a peaceful scene, there’s no doubt. He bought this plot of land next to his house in Giverny to compliment his colourful flower garden and wanted to build a water garden; ‘both for the pleasure of the eye and for the purpose of having subjects to paint’. Monet’s style of painting captures the scene and the atmosphere, simple brush strokes convey the vibrant lilies and reflections in the water, longer strokes for the long grass surrounding the pond perfectly contrasts to the arched bridge, yet all remains to blend together as one dream-like composition. Hopefully I’ll be equally inspired by my own pond!

Of course Hockney takes a more abstract approach to painting water. His series of swimming pool paintings are a luxurious depiction of water and pool-side living in California. His painting ‘Cool Blue’ shows how his talented eye can give the impression of flowing water and reflections in the water using form and structure. This painting provides insight on how Hockney achieves his minimalist concept of water in his other paintings such as ‘Portrait of an Artist (Pool with Two Figures)’ and ‘A Bigger Splash’. The power of the water, how he creates the feeling of movement with light and shade, the swimmer floating in the water contrasting with the structure of the pool and the man standing looking over. The whole scene not only grounds your eye but also takes it into the distance through the mountains, where the undulating mountains almost echo the rippling water.

Painting water is something to enjoy, recreating the colours, the light and shade, the movement and reflections.  ‘Time to Rise’ is one of my water paintings,  taken from a canal on Murano, which captures the early morning feeling just after dawn before anyone is out and about. Painting the reflections in the water from the colourful houses surrounding the canal and depicting the movement in the water shows how this space is transformed because of the canal and of course what a joy for all those lucky enough to wake up to this ever -changing scene each day.

It is not only artists, I feel, but also architects whose work is interestingly affected by the influence of water. An architect who is of course most famous for this is Frank Lloyd-Wright and his stunning ‘Fallingwater’ (1937), one of the most effective houses moulded into and living within nature and its surroundings. . His architectural design led him to become an innovator of the ‘organic’ approach to modern architecture. ‘Fallingwater’s’ landscape was transformed by water and rock following a collision between two continental plates in North and South America. The waterfall and surroundings created is what inspired Wright to design this fantastic building which perfectly complements this setting of nature. Wrights core belief to unite man with nature is an inspiration for so many of us, I think, we may not have the luxury of space like ‘Fallingwater’, but however small our garden is we can bring all these great aspects in and be inspired, like the Kaufmanns’ who lived in ‘Fallingwater’, to not only simply view nature but to actually live in its midst.

So, whilst building my pond, I am reminded of all the beauty that exists in the world because of water, and that reminder 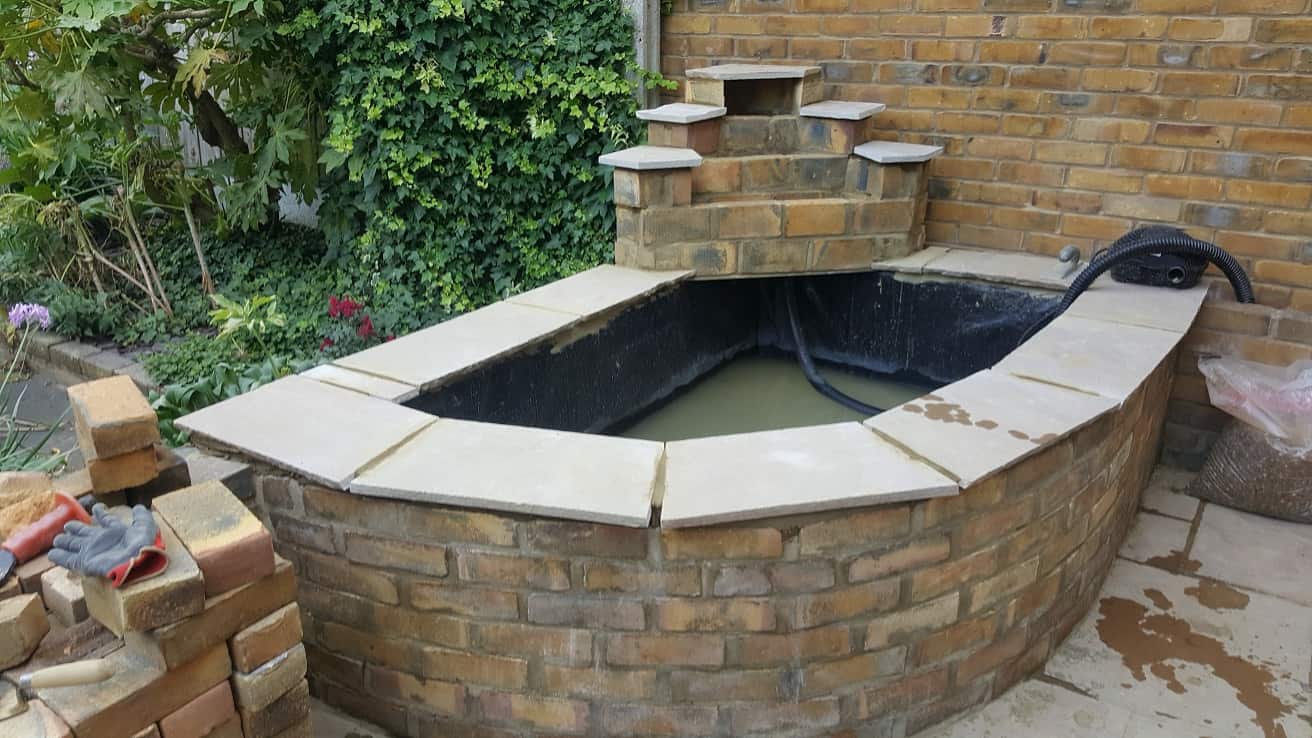 can be a  source of inspiration for me in my paintings. There is so much to see in water, to capture and re-create whether in an abstract way or in the purist simplicity of painting the ponds. There is a beauty in the ever-changing form of water, as with the sky the movement re-creates an array of colours and shapes – you can understand how artists like Monet and Hockney became fascinated with the subject matter. So whatever size pond, pool, canal, seascape you see, I think you should take the beauty of it and create what you feel is aesthetically pleasing for the viewer of your work, if you paint that is – if you don’t then sit back and enjoy the wonder of the water and art – it’s definitely a subject matter that will keep you busy and entertained and I think all the calmer for it.